The First All-Female Spacewalk is Underway 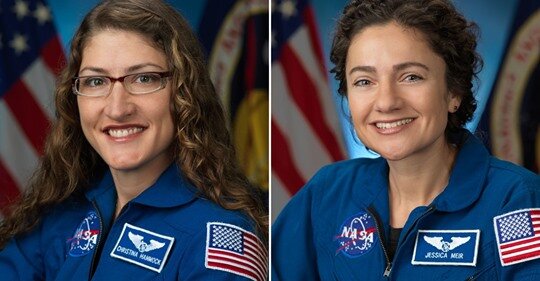 As previously seen on CNN by Ashley Strickland

In order to tell the astronauts apart, Koch’s helmet camera views will bear the number 18 and Meir’s will be number 11. Koch’s spacesuit also has red stripes on it.

This will be the fourth spacewalk for Koch and the first for Meir. Based on their position on the platform, the astronauts will be able to see the Earth pass beneath their feet.

Upon watching the spacewalk begin, NASA astronaut Tracy Dyson said she hopes this is just the first all-female spacewalk and that it becomes a normal occurrence.

The first woman to conduct a spacewalk was Russian cosmonaut Svetlana Savitskaya in 1984, followed closely by NASA astronaut Kathy Sullivan. An additional 12 US women have conducted 40 spacewalks over the past 35 years. Koch and Meir will be 13th and 14th, respectively.

Koch and Meir spoke about women working in human spaceflight during a recent news conference.

“I think it’s important because of the historical nature of what we’re doing and that in the past, women haven’t always been at the table,” Koch said. “It’s wonderful to be contributing to human spaceflight at a time when all contributions are being accepted, when everyone has a role and that can lead, in turn, to increased chance for success.

“There are a lot of people that derive motivation from inspiring stories from people that look like them and I think it’s an important aspect of the story to tell,” Koch said.

Read more of the article by Ashley Strickland at CNN.com

Looking back at family history during the twentieth century, many might think of buying houses, starting a family business, buying estates that would pass...
Read more
Community and Culture

Being a Latinx Immigrant: A path to self-discovery

Most of the time, I find it hard to define myself. Personally, the Latino/a/x identity is pretty confusing to me. Whenever I have to...
Read more
Community and Culture