The Truth About Keanu Reeves And His Asian Roots 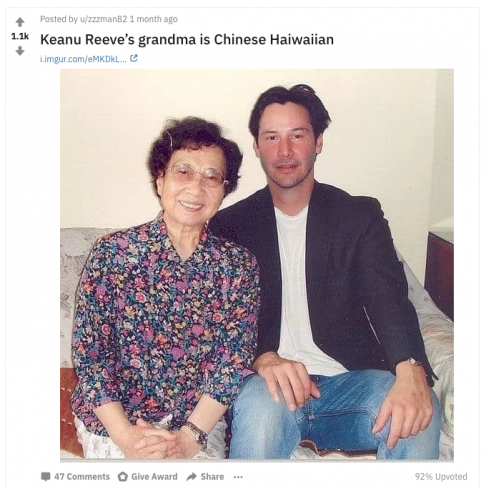 There’s a photo that’s been skidding around the internet.

It shows Keanu Reeves, whose career has been reignited by the success of the John Wick franchise and his brilliantly self-deprecating turn in the Netflix rom-com Always Be My Maybe, sitting on a couch with a smiling, bespectacled older East Asian woman in a flowered print top.

In truth, the picture itself isn’t particularly notable.

It’s actually the image’s whimsically spelled caption that has made the meme go viral: “Keanu Reeve’s grandma is Chinese Haiwaiian.”

From his earliest initiation into Hollywood, Reeves has always been referred to as the “son of a Chinese-Hawaiian father and an English mother.”

And his last two films before the John Wick trilogy were both films with predominantly Asian casts: the old-school kung fu genre revival Man of Tai Chi and 47 Ronin, a loose remake of the samurai epic Chūshingura, in which Reeves starred as a half-Japanese, half-English outcast named Kai.

But every generation seemingly has to renew its love for Keanu, and then, shortly thereafter, rediscover that he has Asian ancestry . . .

Read more by at Jeff Yang at Inkstone

Mason Doherty gives a high-five to a teammate while warming up before a game in St. Peter. Jackson Forderer As people filed into the...
Read more
- Advertisment -